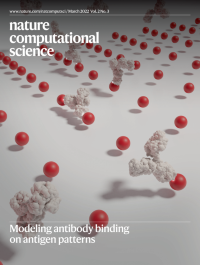 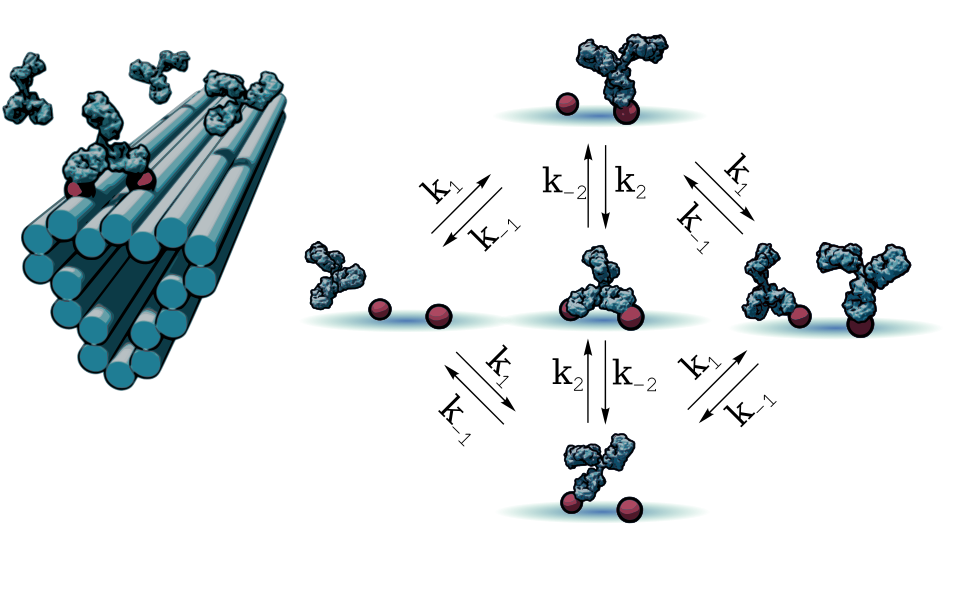 PROGRAMMING ANTIBODY MIGRATION USING PATTERNED ANTIGENS We took the patterned surface plasmon resonance method further in this work by developing a robust model and parameterization pipeline for antibodies binding to clusters of closely patterned antigens. The most surprising part of this study was the discovery that, due to the spring-like preference of antibodies to bind more stabley to antigen dimers of a particular separation distance, our model actually predicts directed migration of antibodies on antigen patterns with gradients of spacing distance. The model, pipeline, and code can be found here: https://github.com/Intertangler/spatial_tolerance 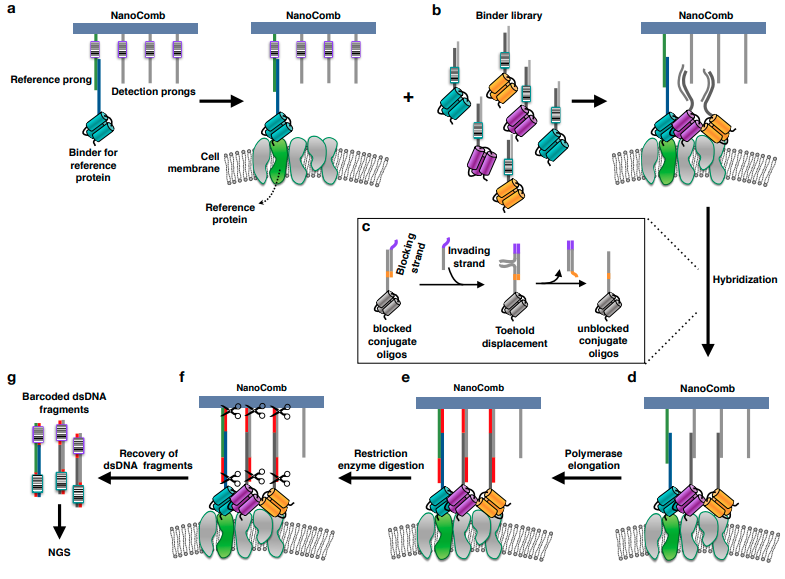 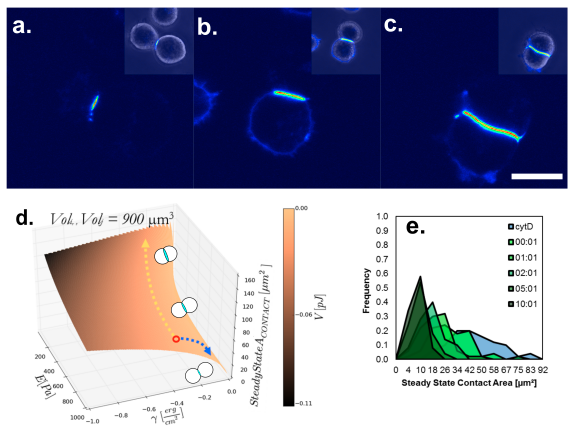 PROGRAMMING THE STRENGTH OF CELL-CELL ADHESION USING DNA Here, we use DNA-conjugated phospholipid molecules to program heterotypic attachment of cell membranes. Controlling the density of binding molecules enables us to tune the strength of the adhesive interaction of cell-cell doublets. We use this tool to study cell-cell adhesion mechanics as a model that is decoupled from the complex native adhesion machinery in cohering cell types.

OPTICS-FREE MICROSCOPY USING DNA SEQUENCING The idea behind this project is to invent a new kind of microscopy that uses DNA sequences instead of light as the primary medium of information transmission. The paper is a computational proof of concept that a dense saturated surface of polonies could be used to store spatial information on a surface that could then be reconstructed into whole images after sequencing and computational processing.

MULTIVALENT ANTIBODY/ANTIGEN BINDING KINETICS WITH DNA ORIGAMI Using DNA origami, it was possible to pattern and modulate spacing of antigens in a controlled reproducible manner. We could then examine the multivalent binding kinetics of antibodies with surface plasmon resonance like never before. My role in the paper was to model the kinetics, calibrate it with real data (left), and generate estimates of the underlying distribution of microstates comprising each point in time.

USING SOLUTIONS TO TOGGLE OPENING AND CLOSING OF A DNA NANOSTRUCTURE By manipulating solution conditions, we could open and close a tethered DNA nanostructure. We used DNA PAINT and image classification to characterize the transitions.

I.T. Hoffecker, S. Chen, A. Gådin, A. Bosco, A. I. Teixeira*, B. Högberg* Solution‐Controlled Conformational Switching of an Anchored Wireframe DNA Nanostructure Small. 03628 , 2018.

ENTROPY, COMPLEXITY, AND FUNCTION IN EARLY HUMAN TECHNOLOGY Structural organization has always been used to extract inferences about the function of biological phenomena. We take a formal approach to this idea with different metrics of complexity to characterize early the technology of early humans and discuss how this sheds light on the problems they faced.

APPLYING INFORMATION THEORY TO HUMAN EVOLUTION Information, automata, and computation theory have shed light on nearly every corner of biological science...except archaeology. That is, until now! In this paper we examine the global dispersal of modern humans through the lens of computational complexity as it applies to early human technologies. 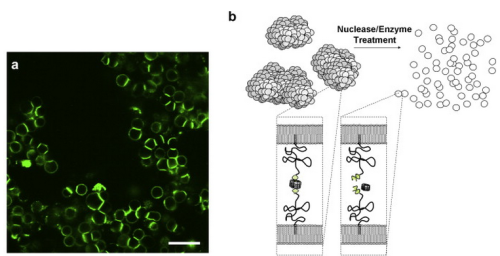 PROGRAMMABLE CELL ATTACHMENT AND SEVERING In this paper, we explore methods to cleave DNA mediating artificial attachment of DNA-lipid-modified cells to flat substrates or other cells. We used BamHI to sever the DNA tethers of cells bearing the correct BamHI recognition site while leaving other tethered cells alone. We also used Benzonase, a powerful nonspecific nuclease, to digest all the tethers and detach cells irrespective of their anchor sequences. Now we have a way to programmably attach and detach cells! 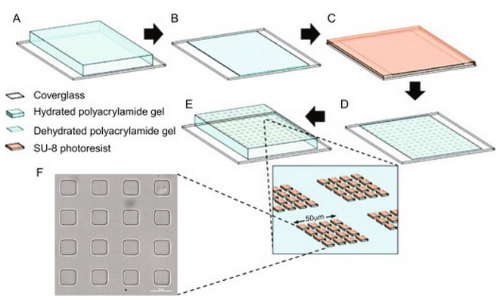 PATTERNING SOFT GELS WITH STIFF ISLANDS To examine the rigidity sensing mechanisms of cells, I previously designed a method for producing micropatterned arrays of rigid photoresist islands grafted to an underlying hydrogel of tunable stiffness. The islands can be made adhesive to cells while the exposed hydrogel is left inert. This is the detailed protocol for producing such substrates. 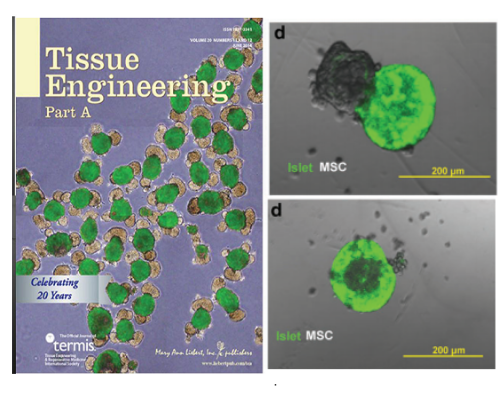 INDUCING MAJOR CHANGES IN CELL SORTING PATTERNS Cell sorting is a process where cells of different types spontaneously undergo relative migration, leading to distinct multicellular domains of differing cell type composition. The range of cell-cell communication is limited, and global patterns emerge due to the iteration of interactions between neighbors. We observed major changes in global sorting patterns after pharmacologically inducing changes in the individual cell-cell cohesive interactions.

DNA-LIPID-MEDIATED ADHESION vs INTEGRIN-MEDIATED ADHESION We induced an artificial form of adhesion between cells modified with ssDNA-lipids and substrates inkjet-printed with complementary ssDNA. When incubated without serum or adhesive proteins in the media, cells took on a bizarre dendrite-like morphology. When in the presence of serum proteins, cells slowly pulled away from their DNA anchors leaving trails of lipid matter behind. This study demonstrates the clear and interesting distinction between natural and artificially induced forms of adhesion. 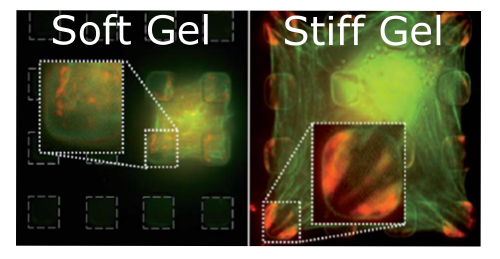 CELL RIGIDITY SENSING IS BLIND TO FINE DETAILS Do cell focal adhesion contain molecular mechanical sensors to measure the intrinsic stiffness of their underlying substrates? Perhaps not. We built micropatterned arrays of rigid islands of sub-cellular size grafted to a soft underlying hydrogel. Though their adhesive contact was restricted to the islands, the cells on these patterns behaved as they would on uniformly soft substrates, apparently ignoring the intrinsic stiffness of the islands. You could say that cells 'pull' their substrates rather than 'pinching' them. 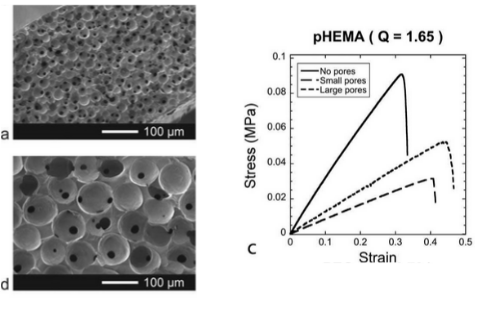